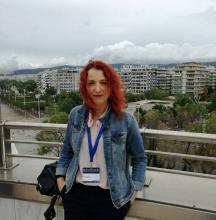 The second part of the present work was concerned with the study of heterogeneous precipitation of CaCO3, following the inoculation of the supersaturated solutions with calcite and biological substrates. In stable supersaturated solutions, (SRcalcite=1.66-9.55), for ionic strength 0.15 M NaCl, the rate of crystal growth increased with supersaturation following a quadratic mode. Keeping the supersaturation value constant in the solutions, the precipitation rate was proportional to the total surface of the substrate, confirming that the number of active crystallization centers is constant. The presence of zinc on the supersaturated solutions at concentrations up to 3·10-5M for ionic strength 0.1M (SRcalcite=7.41) and 0.15M NaCl (SRcalcite=3.55) reduced the rate of crystal growth of calcium carbonate. The rate reduction was higher with, increasing the zinc concentration, reaching 90% of the corresponding rate in its absence. The crystal growth rates of calcium carbonate, measured as a function of zinc concentration, were fitted to a model based on the assumption that the rate reduction is due to adsorption and poisoning of active sites for crystal growth. The adsorption was assumed to take place according to the Langmuir model. The presence of zinc in the supersaturated solutions resulted in a complete inhibition of the crystallisation of calcium carbonate, even at concentrations below the concentration, needed for complete monolayer coverage of the substrate from the zinc chemicals species. The identification of the crystalline solid formed on the substrate confirmed the absence of metal oxide and/or hydroxide. The study of zinc absorption in calcite showed that zinc’s absorption in the solid substrate is initially (the first 10-20minutes) rapid and slower thereafter, approaching equilibrium, corresponding to the maximum amount of zinc that may be absorbed. The concentration measurements of zinc in solutions as a function of time, during adsorption, gave a good fit to the pseudo-first order model. Equilibrium adsorption data gave satisfactory fir to the Langmuir isotherm presence in the supersaturated solutions, resulted in a reduction in the rate of precipitation of calcium carbonate (by 60%). Measurements of nickel adsorption on calcite confirmed the high affinity of the calcium substrate for the metal. Finally, the absorption of cadmium on calcite was slower, in comparison with zinc and nickel. It has also been shown that calcite exhibited selectivity for the elimination of cadmium from solutions reaching 85% of the initial concentration.

Specialization Diploma in "Energy and Environment"