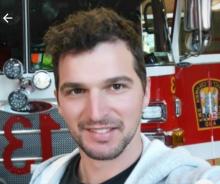 During the three-phase olive oil extraction process, a liquid by-product (OMW) emerges and consists a serious ecological issue if deposited directly into the environment without any further treatment, due to its high toxicity owed to the high organic and phenolic content of the waste. The aim of this thesis is to offer a biological method for waste management via degradation of the toxic organic ingredients of the by-product, using fungi in order to achieve an easier and less harmful disposal to the environment. Specifically, for the purpose of this study and its experiments, the solid sediment of the OMW was mixed with olive tree prunings to create a substrate. This substrate underwent solid-state fermentation (SSF), using five different white rot fungi. Namely: 1. Abortiporus biennis, 2. Agrocybe cylindracea, 3. Phanerochaete chrysosporium, 4. Pleurotus citrinopileatus and 5. Ganoderma lucidum. Due to the different growth rate of each fungus, the incubation period for A. biennis και P. Chrysosporium spaned from 0 to 45 days, while Agrocybe cylindracea, Phanerochaete Pleurotus citrinopileatus and Ganoderma lucidum spaned from 0 to 65 days. Depending on the development of each member and during regular intervals, each intervention was destroyed four times in order to determine and measure different parameters about the degradation of the waste as well as the biochemical processes of each fungus.

The biomass used in this study was inhomogeneous, so in order to achieve homogeneity and suitable size the samples were resized to fit the protocols for each measurement. The studied biomass had a size of less than 1 mm (NREL). During the main experimental phase, the organic and inorganic elements were measured and determined for each time phase with the final measurements resulting from the average value between the four iterations. Specifically in the examined biomass, was determined of the variation of total solids (TS), volatile solids (VS), Oven Dry Weight (ODW), Ash, total organic carbon (TOC) through a TOC gas analyzer equipped with a  Non  Disperative Infra-Red (NDIR) sensor. Consequently, Potassium (K) and Phosphorus (P)  were photometrically measured using the Kalignost method and the ascorbic acid method respectively. Afterwards,  total Kjeldahl  Nitrogen K was determined

During the last phase of the experiments we determined the percentage change of the sugars and the lignin compared to the dry weight of the substrate and again here, the final results were calculated as an average between the four replicates. Using Reflux, the water-soluble and alcohol soluble extracts were removed and the solvent recovery was done using Soxlet. Sugars were measured and determined using high performance liquid chromatography (HPLC).

It was observed that the substrates lost a significant amount of their mass (approximately 35-50%) due to metabolic processes, fungi growth and water evaporation. Thus, as time progresses and as the total organic mass of the substrate decreases (VS/TS), the total organic carbon (TOC) is consumed by the fungi and released into the environment as carbon dioxide (CO2). At the same time we observe an increase of the concentration of inorganic elements such as potassium (K) and phosphorus (P) and TKN. These parameters are dependable on the fungus and its growth.

In all experiments there is a reduction of the organic extracts. The decrease is due to the reduced concentration of total phenolics. The hemicellulose percentage remains almost constant throughout the measurements. The biggest delignification in the sample occurs when the Agrocybe cylindracea fungus is used. When Pleurotus citrinopileatus is used, there is an increase in the percentage of cellulose, while with Phanerochaete chrysosporium a constant change in the percentages of lignin is observed, cellulose and hemicellulose seems like this specific fungus affects each of the 3 elements of the cell wall in similar ways.

The results and measurements will be used in corporation with the Agricultural University of Athens in order to provide a centralized view of the effect of fungi in both the wastewater, and the solid residue so held conclusions about which fungus is more efficient in their detoxification.