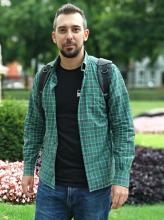 First, the effect of Pt addition on the Ni/CeO2 catalyst is studied. The reaction mechanism was explored using diffuse reflectance infrared spectroscopy under reaction conditions and temperature-programmed surface reaction experiments. The addition of Pt was found to promote the decomposition of dehydrogenated and acetate species to hydrogen, methane, CO and carbonate species. In addition, characterization results in combination with kinetic data suggested that over the PtNi/CeO2 catalyst, Pt forms a partial monolayer on Ni particles. The presence of Pt on the surface of Ni minimized nickel carbide formation, which is associated with amorphous carbon deposition, while promoting the hydrogenation of reactive carbon species adsorbed on the surface, thus improving the stability of the bimetallic catalyst. Next, the effect of CeO2 morphology on the performance of Pt/CeO2 catalysts for the low temperature ethanol steam reforming was investigated, with emphasis on catalyst deactivation. Three different ceria nanostructures (nanocube-NC, nanorods-NR and flower-like-FL) were prepared by the hydrothermal method and were compared with CeO2 obtained by the precipitation method (CeO2-PPT). Regardless of the support, the reaction scheme was found to be the same for all catalysts. However, support morphology seems to influence certain reaction routes. Pt/CeO2-PPT catalyst exhibited the highest activity for ethanol dehydrogenation to acetaldehyde, while Pt catalysts supported on nanostructured supports were found more active for CO methanation and WGS reactions. The latter was attributed to the higher rate of acetate species decomposition over catalysts with structured supports compared to 1% Pt/CeO2-PPT, which might be attributed to higher Pt dispersion. The stability of the catalysts for the steam reforming of ethanol at 300 0C significantly depended on the type of support. Pt supported on CeO2-PPT deactivated rapidly, while Pt/CeO2-NR catalyst remained rather stable. Surface analysis before and after reaction at 300 0C by XPS revealed significant degree of Pt reduction on CeO2-NR, which can be directly related to the reduction of Ce4+ to Ce3+. DRIFTS experiments under steam reforming conditions at 300 0C revealed the accumulation of acetate species on the catalyst containing ceria prepared by precipitation, whereas, this was significantly less pronounced on Pt catalysts supported on nanostructured ceria. The accumulation of acetate species is likely due to the imbalance between the rate of acetate species decomposition to CHx, which is not facilitated over Ptδ+ of the catalyst with the lower Pt dispersion, and their desorption as CH4.

The next part deals with the catalytic performance of a reference catalyst 0.5% Pt/γ-Al2O3 for ethanol steam reforming in the temperature range of 300-450 0C. Emphasis was given on the stability of the catalyst as a function of reaction temperature. Reaction temperature was found to have a strong impact on the stability of the catalyst, as rapid deactivation was observed at temperatures above 400 0C, while the catalyst remained stable up to that temperature. Metal-support interface was destructed at high temperatures, with the reactions that take place over the surface of the carrier and over the metal, being carried out to a lesser extent. Coke formation near the surface of the metal, probably at the metal/support interface, was favored with increasing reaction temperature, suggesting it is the main cause of the observed deactivation, with its amount increasing by an order of magnitude over the deactivated samples (experiments at 430 and 450 0C). Concerning the source of carbon formed, temperature-programmed oxidation experiments of the used 0.5% Pt/Al2O3 catalyst in combination with TPSR experiments under ethanol and acetaldehyde steam reforming conditions, indicated that carbon formation mainly originated from acetaldehyde cracking, with methane decomposition and Boudouard reaction contributing to a lesser extent.

In order to identify the role of acetaldehyde in catalyst deactivation during ethanol steam reforming reaction, stability tests were conducted next, over supported Pt catalysts, under a feed consisting of acetaldehyde and steam. The experiments took place at 340 0C and the results showed rapid deactivation of the catalyst, even at a temperature as low as 340 0C and low partial pressure of acetaldehyde (3.7%). The γ-Al2O3 carrier possesses Lewis acid sites, which promote reactions that can lead to the formation of coke precursors. Thus, in order to neutralize the acid sites of the carrier, the effect of modifying γ-Al2O3 with the addition of Ca is studied. More specifically, the effect of calcination temperature (500 or 800 0C) and Ca loading (1, 3, 6 and 10 wt.%) was investigated. The results showed that 0.5%Pt-3%Ca/γ-Al2O3 catalyst, calcined at 800 0C, presented the optimum performance, as it was found stable under acetaldehyde steam reforming conditions at 340 0C, for more than 18 h TOS. Characterization tests of the modified catalysts showed that the addition of Ca reduced the acid sites of the catalyst, while increasing the number of basic sites. Moreover, the amount of carbon formed over the 0.5%Pt-3%Ca/γ-Al2O3 catalyst was the lowest amongst the various 0.5%Pt-X%Ca/γ-Al2O3 catalysts that were studied, being 7 fold lower than that of the unmodified Pt/Al2O3 sample. The role of Ca is related to the promotion of carbon gasification caused by the improvement of the catalyst’s ability to adsorb and activate H2O, thus facilitating carbon removal and keeping the Pt sites active for the steam reforming of acetaldehyde. Then, the effect of the nature of the support (CeO2, ZrO2, La2O3 and SiO2) on catalytic stability of supported Pt catalysts for the steam reforming of acetaldehyde was studied. Acetaldehyde conversion was found to decrease over all catalysts suggesting the deactivation of the catalysts which is related to the accumulation of carbonaceous deposits, probably at the metal-support interface. The deactivation rate was found to follow the order Pt/ZrO2>Pt/La2O3≈Pt/CeO2>Pt/SiO2.

Aiming at the maximization of hydrogen production from ethanol steam reforming reaction, the overall process can be divided in two stages; the first involves ethanol dehydrogenation to acetaldehyde, while the second, acetaldehyde steam reforming. In the last part of the present study, several supported Co catalysts were tested for acetaldehyde steam reforming reaction. At first, the effect of metal loading and mean crystallite size of Co/Al2O3 catalysts was studied. The catalytic samples were characterized and tested under steady state experiments in terms of activity and stability at various temperatures. Results showed that the increase of metal loading led to increased activity as more active surface sites were available for the reactions to take place. The formation of the desired products H2 and CO2 was found to be favored over 10 and 15% Co/γ-Al2O3 catalysts, while, over the γ-Al2O3 support, the formation of acetone and crotonaldehyde predominated. 10% Co/γ-Al2O3 catalyst showed the best performance during 8 h stability tests carried out at 430 and 480 0C. However, significant carbon deposition was observed over all catalysts, leading to high pressure drop in the system. The characterization of used catalysts indicated that carbon formation is favored over the surface of Co. Concerning the nature of carbon formed, results revealed the formation of amorphous carbon (mainly) as well as filamentous carbon, usually in the form of carbon nanotubes. The amount of deposited carbon was found to increase with increasing metal loading, as it was increased by a factor of 5, with increasing metal loading from 10 to 30 wt.%. Experiments carried out under differential reaction conditions revealed that the structural parameters of the Co/γ-Al2O3 catalysts influenced specific catalytic activity, as it was found to increase (almost by a factor of 3) with decreasing the Co crystallite size from 12.4 to 6.3 nm.

The study of 10%Co/γ-Al2O3 catalyst modification with the addition of La or B did not lead to improved performance compared to the pristine sample. Moreover, a series of Co catalysts supported on SiO2 were prepared in order to study the effect of the nature of the support on catalytic performance under acetaldehyde steam reforming conditions. Results showed that the 20% Co/SiO2 catalyst, even though being less active than those supported on γ-Al2O3 and thus, requiring increased contact times to reach the same values of acetaldehyde conversion, remained rather stable at 480 0C. Concerning the product distribution of 20%Co/SiO2 catalyst, only H2, COx and CH4 were detected, while the catalyst presented higher values of specific surface area and smaller Co crystallite sizes, compared to Co/γ-Al2O3 catalysts. The comparison of the variation of acetaldehyde conversion as a function of temperature over all the catalysts during 8 h stability experiments at 480 0C, showed that 10%Co/γ-Al2O3 and 20%Co/SiO2 catalysts were more stable, while these catalysts also presented the smallest metal crystallite sizes (7.4 and 3.0 nm, respectively). Furthermore, comparison of the quantities of carbon deposition over the catalysts showed that the lowest amount of carbon was formed over Co/SiO2 catalyst (1.4 mgC/mcat2), followed by the 10% Co/Al2O­3 catalyst (1.6 mgC/mcat2). Thus, the observed deactivation is probably related to the formation of carbon, which, in turn, depended on the number of terrace sites of Co particles where it is formed.

Finally, the reaction network of acetaldehyde steam reforming over supported Co catalysts was investigated. The catalysts were studied employing transient experiments in order to gain information about the effect of the support, metal and metal loading on reaction mechanism and on the adsorbed intermediate species formed over the catalytic surface as well as the gas phase products. The combination of TPSR experiments with DRIFTS spectra under acetaldehyde steam reforming conditions led to certain conclusions about the steps of the reaction network. Co was found to be active for the steam reforming reaction, as evidenced by the performance of 10% Co/α-Al2O3 catalyst, even though the product distribution was found to depend strongly on the support, which can promote certain reactions. Thus, while bare SiO2 was found inactive under reaction conditions, the addition of Co led to a product distribution containing solely the desired products (COx, H2 and low amounts of CH4). On the other hand, γ-Al2O3 carrier was found to favor acetaldehyde condensation reactions, contributing to the product distribution of Co/γ-Al2O3 catalysts which contained several by-products (acetone, crotonaldehyde, ethanol).

Specialization Diploma in "Energy and Environment"

3.  M. Kourtelesis, P. Panagiotopoulou, S. Ladas and X.E. Verykios, “Influence of the Support on the Reaction Network of Ethanol Steam Reforming at Low Temperatures Over Pt Catalysts”, Topics in Catalysis, 58 (2015) 1202-1217.