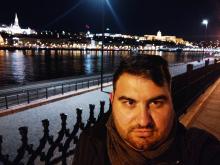 The objective of the present doctoral Thesis is the development and application of advanced computing tools for the prediction of the structural, dynamic, thermodynamic, mechanical and conformational properties of nanoparticle-based systems, either when they are dispersed in polymer matrices or when they are self-organized in the gas phase. To achieve that, appropriate molecular simulation techniques are employed, such as Molecular Dynamics and Monte Carlo. The present study can be distinguished in two parts. In the first part, several nanocomposite systems are studied consisting of polymeric matrices of different chemistry, such as poly (methyl methacrylate) (PMMA) and poly (ethylene glycol) (PEG), and nanoparticles of different chemistry and shape, such as graphene, carbon nanotubes, and amorphous spherical silica particles. In the second part, the agglomeration of fullerene nanoparticles in the gas phase is examined.

In the first part, which makes up the largest body of this Thesis, polymer nanocomposite PMMA-graphene systems are initially tested, examining the phenomenon of graphene agglomeration either in a solvent environment (chloroform) or in the molten polymeric matrix. It is confirmed that, indeed, due to the strong π-π interactions, graphenes tend to come close to each other forming agglomerates, a condition which is not desired since most of the unique properties that characterize graphene is the result of its two-dimensional structure. Then, in a second step, strategies for preventing this undesired phenomenon are tested. For that, and in collaboration with the experimental research groups of prof. Constantinos Tsitsilianis and prof. Constantinos Galiotis in the Department of Chemical Engineering at the University of Patras, we propose to introduce in the host polymer matrix chemically modified PMMA chains bearing pyrene groups at their ends. The idea is that the interaction between polymer chains and graphene sheets through π-π interactions can be enhanced to the degree that it can prevent graphene agglomeration. Two different architectures of chemically modified PMMA chains are tested: linear and 3-arm star. In agreement with experimental observations, the molecular simulations confirm that the presence of modified PMMA chains leads to homogeneous graphene dispersion not only in the chloroform solutions but also in the molten host polymer matrix. In a next step, the mechanical properties of the pure PMMA matrix and its graphene-based nanocomposites are estimated, by making use of the well-established Theodorou-Suter methodology. Estimates of the elastic constants (Young’s modulus, shear modulus, bulk modulus and Poisson’s ratio) of the bulk PMMA polymer are found to be in very good agreement with available literature experimental data. Based on this, we proceeded next to the calculation of the mechanical properties of the graphene-based nanocomposites which indicated a significant enhancement.

In the next part of the Thesis, detailed simulations of PMMA-carbon nanotube nanocomposites are carried out, for the prediction of the structural and dynamic properties, leading finally to an estimate of the systems’ glass transition temperature. The simulations performed, reveal not only strong adsorption of the PMMA chains radially around the carbon nanotubes but also, in some cases, penetration of parts of the polymer chains axially inside them. This is an undesirable situation when these materials are to be used as separation membranes where we wish carbon nanotubes to act as fast flow channels of the compound to be purified. The estimated glass transition temperature of the bulk PMMA matrix is found to be in excellent agreement with experimental values, whereas the presence of carbon nanotubes leads to a slight increase (approximately 6o C) of it.

This part of the dissertation concludes with the study of polymer nanocomposite systems consisting of PEG as host matrix and amorphous spherical silica nanoparticles as filler. An analysis performed on trajectories obtained from the detailed molecular simulations, combined with a constitutive model developed in collaboration with assist. prof. Pavlos Stephanou in the Department of Chemical Engineering at the Technical University of Cyprus, is found to capture quite accurately the microscopic dynamics of those model systems, from the level of a few monomeric units to the level of terminal chain relaxation. It is worth noting that all values of the parameters involved in the model are directly borrowed from the simulations, and no adjustable parameters are introduced. Both simulation and model predictions are found in excellent agreement with available experimental values from state-of-the-art Neutron Spin Echo experiments. Furthermore, the methodology employed can accurately predict the completely different dynamics followed by PEG chains in their silica nanocomposites when the polymer terminal units are changed from hydroxyl to methyl ones. Such a finding would have been difficult to observe in coarse-grained simulations, where the detailed chemistry of molecules is greatly simplified. Finally, the influence of the size and concentration of silica nanoparticles in the nanocomposite are examined, with the analysis carried out showing that under specific conditions, a dense network is formed between silica nanoparticles and polymer chains, as a result of the strong adsorption of the latter onto the former. This network formation significantly decelerates the dynamics of polymer chains in the nanocomposite.

In the second part of the Thesis, the agglomeration of spherical fullerene particles in the gas phase is examined. The time scales that characterize such a process exceeds by far the maximum time scales that can be addressed through brute-force Molecular Dynamics simulations. To overcome this, we develop a powerful stochastic Monte Carlo algorithm based on some “smart” moves. These moves allow us to observe the formation of large fullerene agglomerates modelled in full atomistic detail. The quantities examined for the structural characterization of the agglomerates are in favorable agreement with bibliography values. The new methodology is very promising and can be extended to other nanoparticles widely used in technological applications, such as silica, titanium(III) oxide, zinc oxide etc., with only minor modifications on the existing version of the code.

Emmanouil – Theodoros Skountzos received his Diploma in Chemical Engineering from the Department of Chemical Engineering at the University of Patras in 2010 and his M.Sc. in Simulation, Optimization, and Process Control from the same School in 2013. Since 2015 he is carrying out his Ph.D. Thesis in the same Department under the supervision of prof. Vlasis G. Mavrantzas, during which he focused on the development and application of advanced computing tools for the prediction of the structural, dynamic, thermodynamic, mechanical, and conformational properties of nanoparticle-based systems, either when they are dispersed in polymer matrices or when they are self-organized in the gas phase. The scientific results that have emerged during his postgraduate studies have led to the publication of thirteen peer-reviewed articles in several international scientific journals. Four of them have been selected as Front Covers images in Macromolecules, ACS MacroLetters, Soft Matter, and Macromolecular Theory and Simulation journals. He has received the ELIDEK scholarship for doctoral candidates and has participated in several national and international research programs.