My research in the last ten years focuses on the design and development of remote-query sensors consisting of selective inorganic layers (i.e. zeolite films, TiO2, etc) adhered on magnetoelastic materials.

The sensors are micro-sized physical devices which produce an electrical signal in response to the change of a physical environmental parameter such as humidity, pressure, gas concentration etc.

Magnetoelastic materials are a particular type of soft magnetic materials which deform (alter their shape) under the application of an external magnetic field. They can be set to resonate under the application of an AC field. The resonance frequency depends only on material and geometry properties. Sensors can be made by developing special selective layers on magnetoelastic layers. When the physical parameter of interest changes, the selective layer responds by altering the material properties of the magnetoelastic layer and thus its resonance frequency. Special electronics can be used to detect the resonance frequency and under suitable calibration, the physical parameter can be accurately measured.
As it can be seen by the related publications on the current website, my research group designed sensors that were used for monitoring of environmental / chem / bio parameters, such as

The major advantages of magnetoelastic sensors are

Magnetoelastic thin-film sensors can be considered the magnetic analogue of an acoustic bell: in response to an externally applied magnetic field impulse, the sensors ring like a bell, emitting both magnetic flux and acoustic energy with a characteristic resonant frequency. The magnetic flux or the acoustic energy can be detected remotely, external to the test area, using a pick-up coil or a microphone. By monitoring changes in the characteristic resonant frequency of the sensor, multiple environmental parameters can be measured. 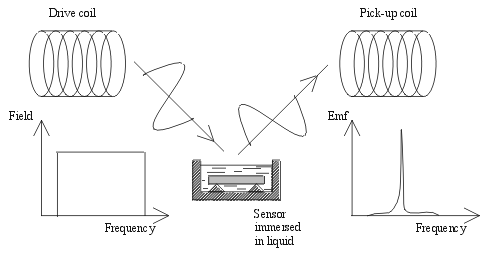 In combination with microporous inorganic films with selective adsorption properties, remote query chemo-bio sensors can be made. Depending upon the application, magnetoelastic sensors can be sized from micrometer to millimeter dimensional scales.

In most applications, we have successfully used magnetoelastic sensors as microbalances to monitor in-situ small mass increments. However, in the case where thin zeolite films were used as the selective layer, we discovered that gas adsorption related internal stresses alter the zeolite unit cell and thus alter the sensor signal. This information was utilized, with the aid of theoretical models and computer fit techniques to extract the value of the internal stresses versus gas adsorption. The results are interesting because they explain adsorption related phenomena in zeolite membranes that were difficult to understand before.

Sensor technology has made great advances the last twenty years thanks to the use of new smart materials and the improvement of the material design and characterization. I believe that the use of magnetoelastic sensors hasn’t been fully deployed and there is more work towards use them for remote sensing inside tubes, closed tanks and other environments that physical penetration of cables is not possible. Of great interest is the non-destructing and non-invasive detection of elastic properties such as internal stresses in mechanical structures such as aircraft blades and turbine blades.

Therefore, given the appropriate means, (graduate students, laboratory space and proposal funds) I would like to fully develop the following two technologies

1) Non destructive, in situ measurement of internal stresses in rotating turbine blades, while the engine is in full operation. The realization of such an idea is possible by the remote sensing nature of the magnetoelastic sensors, and thus there is no need for physical contact with the sensor which can be placed directly on the blade. The detection is possible with the aid of a stationary coil

2) Non destructive, in situ measurement of internal pressure of fluids in pipes, such as Liquid Petroleum Gas in pipes in order to determine possible leaks in the pipe network.